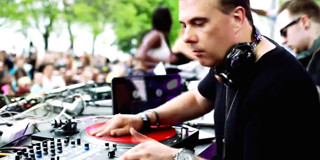 
Given you have played and produced ghetto-tech for so long, has your approach changed at all? Would you approach a history of ghetto-tech set any differently?

I don’t really plan my sets or anything like that. I’ll just kind of feel out the crowd. If it’s an older crowd, I’ll play a little something slower and a lot more classic stuff, mixed in with the new stuff. If it’s a newer crowd, I’ll play faster and more aggressive stuff.

Can you tell us a bit about the roots of this music and how you approach producing it?

Ghetto-tech came from mixing old Miami bass records with Detroit techno. When early Detroit techno came along, it made its impact in Detroit. That was in the early to mid 80s. When you hit 1990, the younger brothers and sisters of the people that grew up during the first wave of techno came along and they didn’t really know techno that well because they were too young.

When I started DJing, I was only 15 years old and I was DJing in a teen club. There was no alcohol or anything like that. You couldn’t just play Detroit techno. It was a young crowd of 12 and 13 year olds and they couldn’t understand it. So, what myself and others used to do was play things like 2 Live Crew out of Miami. Because it was dirty, explicit lyrics, kids could relate to it. What we would do was take a techno record and, just when we thought we would lose the crowd, we would mix a 2 Live Crew record over the techno track. That would get their attention. That’s how the whole sound came about, at least for me anyway. I would play a techno record then a Miami Bass record with words in it, and then go back to a techno record. When we started producing the records that way, a couple of years later when I was 17, we would actually take beats and things that we liked from a techno record and take what we liked off the Miami bass records and fuse them together.

A lot of people don’t realise that when we’re making these records, we’re not making a song. We’re making a DJ tool – something that you can go in and out of for a minute. A lot of other producers don’t structure the tracks in the right way. These tracks are not meant to hold your attention for a long time. You have to make the tracks so you can go in and out really fast in the first minute. Otherwise you’re going to lose the crowd because there is a lot of repetition in the tracks. If people hear the same words or the same beats chopped up in a loop for three minutes at a time it gets kind of boring. So you have to be in and out with the records.

How important has the city of Detroit been in influencing your music and ghetto-tech in general?

In my eyes, a lot of producers from Detroit were influencing each other, which created its own vibe and its own attitude in the records. When I started making ghetto-tech records, it’s funny, I never even thought of that record reaching beyond Detroit. If you make a really good ghetto-tech record, you’ll do around 1500 copies in the city alone. So my attitude was, ‘I need to do a record a month. I can do three or four songs in a month.’ We were only

selling them out of about 5 or 6 record shops. I wasn’t even thinking about anywhere else. I was just making sure that the record did well in Detroit. When I was 17 years old, I had never DJed overseas or anything like that or played anywhere else. I didn’t even think it would go that far. So, at least for me, every time I made a record, it was for Detroit. I knew what sounds and what kind of attitude the records had to have.

So, a record a month turns into two records a month and it’s pretty good when you’re selling 4000 records a month in your own city and you don’t even have to deal with a distributor. I didn’t even know what distribution was at that time. I had a Jeep Cherokee and the back of it was full of records. I’d drop them off at the record stores every week and collect money. I was the distributor. But, having that mentality, made me create records for my city. I didn’t think other people even knew what that kind of music was. Next thing you know, it started getting out there more and more. The same kinds of things happened with a lot of other Detroit artists as well.

A lot of people outside of Detroit are trying to do ghetto-tech records and you can really tell the difference. The Detroit stuff is dirty sounding on purpose. It has to have that Detroit vibe, while still being aggressive, if that makes sense. A lot of people will do a fast ghettotech record and you can tell it’s not from Detroit. It’s lacking that grit and soul to it that you hear in Detroit house and techno music. There’s just a certain attitude that you hear in the beats.

How would you describe the connection between ghetto-tech and the more traditional form of techno that Detroit is known for?

Straight Detroit techno played a key role in ghetto-tech. But ghetto-tech also opened doors for techno in Detroit, because there’s a certain audience that will listen to ghetto-tech for 20 years straight but won’t listen to a whole techno set because it’s too boring for them. So ghetto-tech actually opens doors for techno because there are some techno records that you would hear in a ghetto-tech set that would be really popular and people would do jit and footwork dance battles to these records. This was before you were DJing off laptops or CDJs or whatever. So every DJ would have to buy two copies of each record to use for beat juggling. If you had a good ghetto-tech record, you would sell about 1500 copies just in Detroit alone because every DJ was buying two copies. The next thing you know, because there are certain techno records that have elements that appealed to a ghetto-tech crowd, it would really open doors for that techno record too. So they kind of helped each other out. Ghetto-tech is the offspring of techno but when you do a ghetto-tech set, and you’re playing a straight techno record behind it, there were certain key records that would do good, whereas maybe the regular techno crowd wouldn’t be into them as much.

How popular is ghetto-tech in Detroit, in comparison with straight house and techno?

You didn’t hear too many techno or deep house radio shows. There was maybe one, once a week, in Detroit. Ghetto-tech appealed to wider audiences because it’s hip hop influenced, it’s DJ battle influenced, its techno and Miami bass influenced – all this thrown in one big pot. It was almost like the first mashup, before those types of records came about. So it grabbed a lot of people’s attention really fast.

How important do you think it is to have nights like this that celebrate the legacy of Detroit?

It’s very important because, as I said before, Detroit has its own sound and you can really hear the attitude in Detroit records when you hear them. It’s good to recognise this music and let people know where it came from. For one, it will attract a crowd that already has a lot of knowledge of the music. For me, those are the really fun nights. People are going to these nights because that’s what they want to hear. You don’t have to educate people. But it can work as an educational thing too. There are a new generation of people that maybe grew up to dubstep or something and this might be new to them. So, it can work both ways.