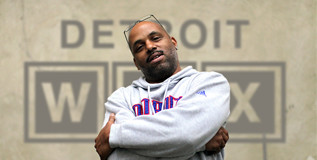 
Eddie ‘Flashin’’ Fowlkes kicked off the Motor City Electronics series in August with a “History of Detroit Techno” set.  Before the event, he spoke to Ronan Martin as part of a feature published in this month’s issue of The Skinny.

You can read the full feature here: http://www.theskinny.co.uk/clubs/features/303441-motor_city_electronics

Below are highlights from the interview, including material not included in the published feature.

On his approach to putting together a special “History of Detroit Techno” set:

It was hard.  It took me about a week to actually put what I think represents Detroit in there.  There’s so much music and it’s hard to put it all into a two hour set.  I did my best.  The main thing is that I want to play what I feel is the heart of Detroit – not so hard, not so soft.  You have to remember the music wasn’t at 130 [beats per minute] when we started off.  It ain’t what kids nowadays think it is, like trance.  The funk and the soul play a part in Detroit.

Kevin Saunderson’s biggest records weren’t really techno records; they were vocal records – Big Fun and Good Life.  Mostly Juan Atkins’ stuff was all vocals – all the Cybotron shit, early Model 500, the Metroplex stuff was all vocals.  Then Marc Kinchen came over and crushed the world.  So really it was the vocal shit out of Detroit that crushed the world, it wasn’t instrumental shit.

I like techno and I enjoy my house.  So, you entwine the two, it’s like my techno-soul.  I’m not going to sit here and play boom, boom, boom.  I’ve got to play what got me here.  I only know what I know and it would be stupid for me to be playing anything else all night, when I’m not feeling it.  Then I’m just stealing the money!

On the state of techno generally nowadays:

In my opinion, I think techno is coming back to its original form, where people are playing sounds with vocals.  You have to remember, minimal came in and just slapped everyone around.  Then everybody got tired of going to a party and there wasn’t any ‘hell yeah’ in it.  So now the minimal cats are starting to put in little funky chords and little samples and, as that builds up, it goes back to how it started.  It’s coming directly full circle.  The younger generation don’t understand the past so it will be hard for them to understand what I’m saying, but the older heads will know what I’m talking about.

There are so many festivals now.  The festival people just like to go out and drink, do their drugs and have fun, compared to years ago when people actually paid their money because they knew who was performing.  Now, less than half of the crowd know who is playing and the rest are like ‘Yo, I heard this was going to be a good party’.  There are too many DJs now.  I think those days are over with.

I’ve put the City Boy label on the shelf for a while and I’m just going to run with Detroit Wax.  I’ve got a test pressing now that’s coming out on Juno records out of the UK.  That’s going to be more my techno-soul stuff.  I’ll probably just release my City Boy back catalogue on digital download.  I’m just going to move forward with 10 inches instead of 12 inches on Detroit Wax, because vinyl isn’t really selling.  You can cut the cost with 10 inches and still put some vinyl product out there.

On Motor City Electronics and celebrating the legacy of Detroit: