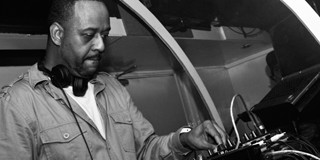 
What are your thoughts on being asked to play a “History of Detroit Electro” set?

I didn’t specifically pick out anything. I already have a lot of stuff, so it’s just going to be spur of the moment. I don’t usually play all electro sets. I’ll play electro, house, techno, acapellas or whatever. But it’s an honour to be asked to do a full electro set here because I’ve been involved in the electro scene from early on.

Nowadays there’s a lot of music being called “electro”. Much of it deviates a lot from what you and I might recognise as electro. What are your thoughts on that?

I’m just part of a genre that was created called electro. Originally we called it techno, but I can’t really do anything about people coming up with new genres. I guess it’s a good thing in a way because maybe people will understand that there’s more than one style. They can check it out and see for themselves that, you know, electro house is not electro. Some electro is dark electro, some electro is electroclash or whatever.

I was upset at first when electro house came along and people were referring to my stuff as electro house. Not that there’s anything wrong with it, but that’s not what we do. I personally call our style electro-funk. Derrick May used to talk about putting George Clinton and Kraftwerk in an elevator together and seeing what you get. That’s the way we look at it. To me, our thing is like putting George Clinton in the elevator with Juan Atkins.

Where does techno-bass fit in with all of this?

Me and Tom didn’t come up with the title techno-bass. It was originally created by Dynamix II in a song. We always just called it techno. Anything that came out of Detroit was called techno. Even Juan’s Cybotron stuff was called techno. But our style was techno first, then we added the bass element to it with alternative kicks and then we took it a step further by adding vocals, then another step further by creating songs not tracks, with choruses and verses, making party-type records.

Detroit is recognised as one of the most important places in the development of electronic music. I wondered if you could tell me a bit about the city’s influence on you and what you think makes Detroit so special.

What makes Detroit special is that, for anyone who started out, it was a struggle. You didn’t have much money so when you bought certain pieces of gear it was a big deal. People look at them like little toys now. Our weapon of choice was the Casio CZ-101. We worked that thing and we got bass sounds, kick sounds, snares – anything we could out of it. You worked harder to learn your craft.

Coming from Detroit, you had to live up to a reputation too. Other people came before me and they were putting out stuff that was mind-blowing. So you always had that sense of competition. It’s not like that anymore. A lot of people don’t think, ‘Well I have to do something that I could say that Juan could be proud of.’ People don’t care anymore. They

make their music and they don’t care if anybody likes it. I felt like everything we did had to be good. You had to live up to those [earlier] guys. They heard your stuff before anybody did and, if they liked it, then the world would like it. They were honest too. They would tell you if it was bad or not.

I don’t care what country you go to, when you see the word ‘Detroit’ on that flyer, it’s a reputation that we have to uphold. We’re coming over like we’re bringing you a fix, like a drug, to show you what it is that we do and the music that we’re proud of. The only thing that I’m really disappointed in with a lot of techno artists from Detroit is that they’re not playing Detroit stuff anymore. A lot of stuff they’re playing is not even techno. I know you have to expand. I mean, I’ve expanded. I’ll play Herbert and play a lot of different stuff that I never used to listen to until I got into the music world. But, a lot of the time, guys don’t play a lot from Detroit. I play a lot of Detroit classics and a lot of new stuff. But, to each his own. They’re still great DJs and they’re still spreading the word.

What’s on the horizon in terms of your own music?

Mad Scientist was the last electro album that we are ever going to do. It was kind of dedicated to the whole steampunk movement and Drexciya. We used so much gear it was ridiculous – a lot of analogue and digital gear. We did a couple of remixes off that. We had Anthony Rother, Mr Velcro Fastener, Detroit in Effect, Gosub and all these different people doing remixes. Then we wanted to turn around and bring something different, getting away from the electro sound. So we came up with AUX 88 presents Black Tokyo with two other members, Ice Truck and Erika. Erika does spoken word and visuals and Ice Truck is the main vocalist for all of our stuff. It’s been a happy departure. We’ve been doing a lot bigger venues and events and it’s a whole other techno side to us.

Next year will probably see three new Black Tokyo projects released, which are really already done. There should also be three new Optic Nerve releases. So we will put out 6 releases, at the most, for the year. We don’t want to put on too much. You need to give it time to breathe.

So, will there be no new electro material? Not even the odd EP?

Me and Tommy talked about it. At one point we said we weren’t even going to make any more electro. But we decided that we would maybe do one electro project a year. It’ll be something special though. It may consist of one new track, one remix and there might be a repress from Direct Beat or something like that. We’ve also done some collaborations that haven’t came out with people like The Unknown DJ from LA. But, apart from maybe one a year, we’re pretty much going to leave the electro thing alone. It’s just time to grow. We like that people know us for electro but we don’t just want to be known as old school artists because I don’t think our sound is old school at all.

Black Tokyo was a real big love of ours. Before we put it out, we were doing it about four years ago in the AUX 88 shows, and people were loving it. So it’s just funny to see that when it comes out now, a lot of people are upset. But no one got upset when Juan [Atkins] moved from doing electro to techno. It’s time to move on. You have to grow.

As you grow, are there any limitations you place on the kind of music you may produce in the future?

Coming from Detroit, everything you do is built on a concept. Like AUX presents Black Tokyo is a whole different persona, a different project. We don’t put limitations on the music, but we won’t deviate from our concepts. With Black Tokyo, we hooked up with a furniture company that created a Black Tokyo table. We’re trying to go into a more artsy type of style. It’s a full concept, rather than just the music.

There has been a bit of a tradition with Detroit-based artists, particularly the likes of Drexciya and UR, of using concepts to frame the music. Do you think there is a particular reason why so much of the city’s output has been driven through concepts?

There are a lot of similarities between Detroit and Germany. Detroit is a dark kind of city and people really followed what Kraftwerk were doing with their concepts and the idea of the underground and faceless music. It’s not about our faces; it’s about what we put out. I think that kind of carried on through. That’s just a Detroit thing. First and foremost, it’s about the music. Kraftwerk, I think, are more influential on any Detroit artist than any other artist in the world. There were other groups before Kraftwerk, but it was just the way they carried themselves. The LA electronic groups didn’t have that. Their thing was more hip hop, Miami bass was the same thing. Even Chicago had more of a disco thing. Detroit is just a little bit different.

There’s that kinship between Detroit and Germany. Germans are very cool and relaxed. Likewise, in Detroit, you don’t just act silly; you play it cool and very low key. I think that comes from coming from the hood, in a way. You never show your face, meaning you never show your weak side. You always act strong. That’s why you don’t see guys smiling in pictures. You might see them doing it now, when you’re out at a party, but never in a photo. You know, we’re serious about this. I’ve had girls ask me, ‘Why do you guys never smile?’ I’m like, ‘You don’t get it. It’s not about that.’ It’s very serious.”